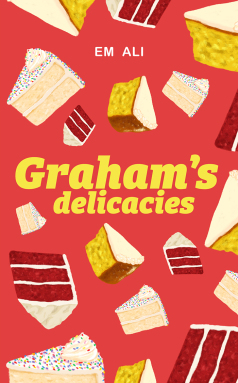 Rep: See below for each story

CW: Explicit sex (one with kink elements), mention of parent’s death, misgendering (challenged) The list with chapter number(s) is included at the beginning of the book.

Six people and three love stories all in one bakery.

Saccharine
Jen goes to work, agonizes over college, and looks forward to the stolen moments in the kitchen. There she can watch Emilie bake love into every morsel. Their delicate friendship takes a step towards a budding romance, but will Jen’s anxiety help them survive their first hurdle?

Delectable
James has never been kissed but he wants to be. Especially by his co-worker Sam, who he can’t talk to without turning into a little jerk. Sam is made of all the good stuff, but will James’ deepest insecurities allow him to kiss the boy?

Ravenous
Alex won’t let some foodie with a video camera bash their beloved bakery, even if it means to be petty. Except they’re nowhere ready for Yujin, the one who got away and is now romancing them. Will Alex’s pride let them see the gold heart the bashful king hides?

Sweet stories with the kind of representation we need more of.

Em Ali’s strength as a writer is in their characters. Each character has a distinct voice and even characters we only encounter for one scene have their own personalities. That realism is what makes all three short stories successful, without it the romance would fall flat.

The use of pronouns in the writing took me out at times because pretty often the character’s pronoun would be used before their name. In most cases it wasn’t confusing because in most cases the people in the scene used different pronouns, but it felt like that scene from One Day At A Time where Lydia says ”Excuse me, she” and as much as I love Lydia I don’t want her voice in my head when I’m about to read a sex scene.

The dialogue was very well written and it did a great job of adding more context to the story while building intimacy between the characters. It saved a lot of time spent on exposition, which is not what you want for a short story.

Emilie (they/them, she/her in some cases) — Nonbinary, fat, has anxiety

It was great that the story normalized consequences of mental illness like taking time off of school and not making eye contact. It also sidestepped the miscommunication trope and avoided instalove, but I found that there was less tension than I prefer to see in my romance.

That was my favorite story of the book. The tension almost killed me a couple of times and it had my laughing so hard my brother complained.

It’s rare that YA and NA books have queer characters who enter their twenties having never been in a relationship even if it’s a common occurrence, especially with those of us who grew up religious. Dont’ worry, Em Ali’s got you. James is inexperienced, but he is not infantilized.

I had a bit of a hard time with this story because Alex is kind of an ass. We didn’t get to know them during the first two stories so it was hard to get to like them as a charcter in such a short time. I really like Yujin so once these two went from enemies to flirting I got on board immediately.

If you like romance and you don’t need a strong driving plot you need to pick this up. It can be really hard to write good romantic short stories but Em Ali did it. This is a candy read for when you want an entirely queer cast living their best life.